supplement to report about racist violation against refugee in Sombor [03.08.2017]

In the fringe area of Sombor, a charming Serbian town with around 60.000 habitants, less than 20km to the Croatian and less then 40km distance to the Hungarian border, a temporary refugee camp (Transit Center*) opened in the beginning of November 2016 as one of nine temporary shelters built up from autumn 2016 until spring 2017 in order to accommodate the increasing number of refugees in Serbia at this time.
Since several weeks people staying in Sombor TC feel more and more stress triggered by enforced relocations to the closed camp Presovo, the presence of fascists & racist violations from locals and pressure from the camp’s authority.

From the beginning the Sombor Transit center was one of Serbia’s smallest camps. Mainly families were and are living there, usually between 80 and 150 people all together.
It is located ca. 5km from Sombor’s city center, in a pretty outside district, surrounded by wood and fields and like all camps managed by the “Serbian Commissioner for refugees and migrants” (SCRM).
The camp consists of quite a lot of open area with some single trees and wild growing grass, an office house for the administration, a bigger shelter house for families and unaccompanied minors and a big white tent for alone-traveling-men. Generally single men are not allowed to enter the families’ house. While sanitation for families are in the shelter house, those who sleep in the tent use toilets and showers installed in some containers outside. Even for eating they stay outside or in the tightness of their bunk beds in the tent after the food distribution. Residents claim that the food is bad and not nutritious (lunch delivered by an external caterer seems to be okay, but breakfast and dinner is always just few slices of white toast and tasteless tea). Often people decide to buy food in a supermarket 10 minutes by foot from the camp and cook themselves. Privacy is rare especially for those staying in the tent, hygiene is good – also due to the Commissariat’s daily order with some residents to clean and tidy up rooms, “garden” and washing rooms. Every day from morning until 5pm there are some doctors available in the camp who however only provide painkillers and are not equipped for serious cases of injuries or sicknesses. Regularly also a couple of policemen is present in the camp usually doing nothing. Aside of accommodation, toilets, showers, food and free Wifi, the camp’s offering is very poor, especially in sense of “free time” activities. Apart from a meager outside play ground for kids and a simple football or basketball ground there is NO kind of offer from the camp’s side such as language or school lessons, separate children or woman spaces, workshops nor any happenings or events. People do not receive any pocket money or materials (f.e. for recreational activity). The daily life is in a bad sense extremely boring, people feel completely out of opportunities. The center’s administration’s comment: they were responsible for accommodation and food in the camp but nothing else.¹ 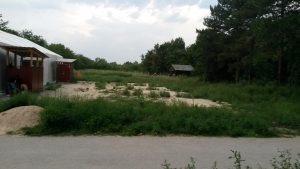 TC Sombor: terrain next to the white tent 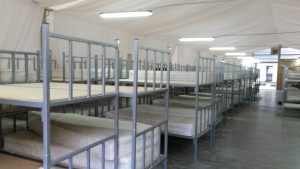 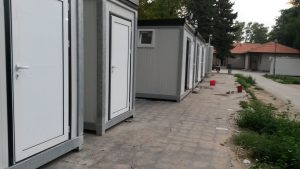 Tc Sombor: containers with showers and toilents, family-house in the background 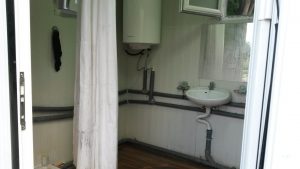 TC Sombor: inside the shower container

The whole camp area is surrounded by a shoulder high fence with two gates from which one is usually closed and the other one in front on the administration house in the Commissariat’s field of view but open during daytime. Only residents and people who are working inside the camp are allowed to enter. Officially the camp is currently not receiving new people. But although the Commissariat refuses to register more refugees or to distribute more meal vouchers they do not make any effort to keep an overview who is staying in the camp. As there are several big well-known wholes in the fence and the commissariat is not checking people’s registration cards lots of people without registration are entering, staying and leaving the camp without any problems.
As the capacity of the camp is still far from being reached, as inhabitants report, people suppose that the camp’s leadership does not cancel old registrations which means that quite a lot of people are registered in Sombor who are not staying there (anymore) and consequently that the official number of residents is much higher then the actual which might be the reason why new registrations are not possible anymore. Generally people describe the camp’s management as corrupt and unfriendly. Showing no interest for the people’s needs they are sometimes threatening for example with deportations to the RC in Presovo in order to create pressure and obedience.

As this blog already reported about current enforced relocations to the closed camp in Presovo  (click here), also residents of Sombor TC are affected by that. People staying in the camp report about policemen irregularly coming in the very early morning hours (2-5pm) inside the camp and forcing some single men sleeping in the tent into buses that drive them to Presovo: The police is surrounding the tent, blocking the entrances to prevent escape and beat those who try to resist. Some people got already deported several times, as some succeed to come back from Presovo to Sombor, but again were relocated, some of them even two or three times. After a couple of this incidents people are very afraid and leave the camp over night. Only the families in the shelter house and some single men who are badly injured (Hungarian border police violence) or seriously sick are still sleeping in the white tent. Also sleeping in the surroundings of the center is not safe as police is also targeting for people in the jungle and fields in this area. It is assumed that SCRM wants to transform the center to a shelter just for families and unaccompanied minors via that relocations.

Another development stoking fears and insecurity is the increasing presence of racist Serbians in Sombor. A report about a racist attack by locals on a migrant  describes the current xenophobic atmosphere and incident recently going on in Sombor (click here). Generally people are threatened not to leave the camp after 7pm by fascists “patrolling” as an informal “vigilante group” the street leading to the city, taunting, forcing people to go “back to the camp”, offend people with insulting prejudice and allegations, pushing and physically badgering. Also physical or verbal attacks during nighttime on people sleeping outside of the camp is increasing and getting more and more brutal. About those incidents the Center’s leadership does not feel in charge as well, even does not interfere when they witness violent attacks and accuses the migrants that they should not leave the camp especially during the night. Also the police sends people away who try to report an offense about violations just blaming that migrants should stay inside the TC. This atmosphere also creates an even bigger isolation between migrants and locals as people living in the camp get unconfident about going to the city center at all or getting in contact with Serbians.

*There are five “Asylum centers” (AC) in Serbia and 13 temporary centers called “Transit centers”(TC) or “Reception centers”(RC): map of all refugee camps in Serbia (July 2017)
¹ Report about racist violation against refugee in Sombor [03.08.2017]